Bitcoin (BTC) has made a stellar comeback from its March lows in 2020 and this performance is getting noticed by institutional investors. Recently Rick Rieder, BlackRock’s CIO of fixed income, said that Bitcoin could replace gold as it is “more functional than passing a bar of gold around.”

Comments like these are a positive sign as they demonstrate that the narrative of Bitcoin being increasingly viewed as digital gold even among traditional investors has been gaining wider acceptance.

A new report by crypto investment firm Pantera Capital attributes the recent uptick in Bitcoin’s price to PayPal’s new crypto service. According to Pantera, data shows that “PayPal is already buying almost 70% of the new supply of bitcoins” and Cash App the rest 30%, which has created a real supply shortage. 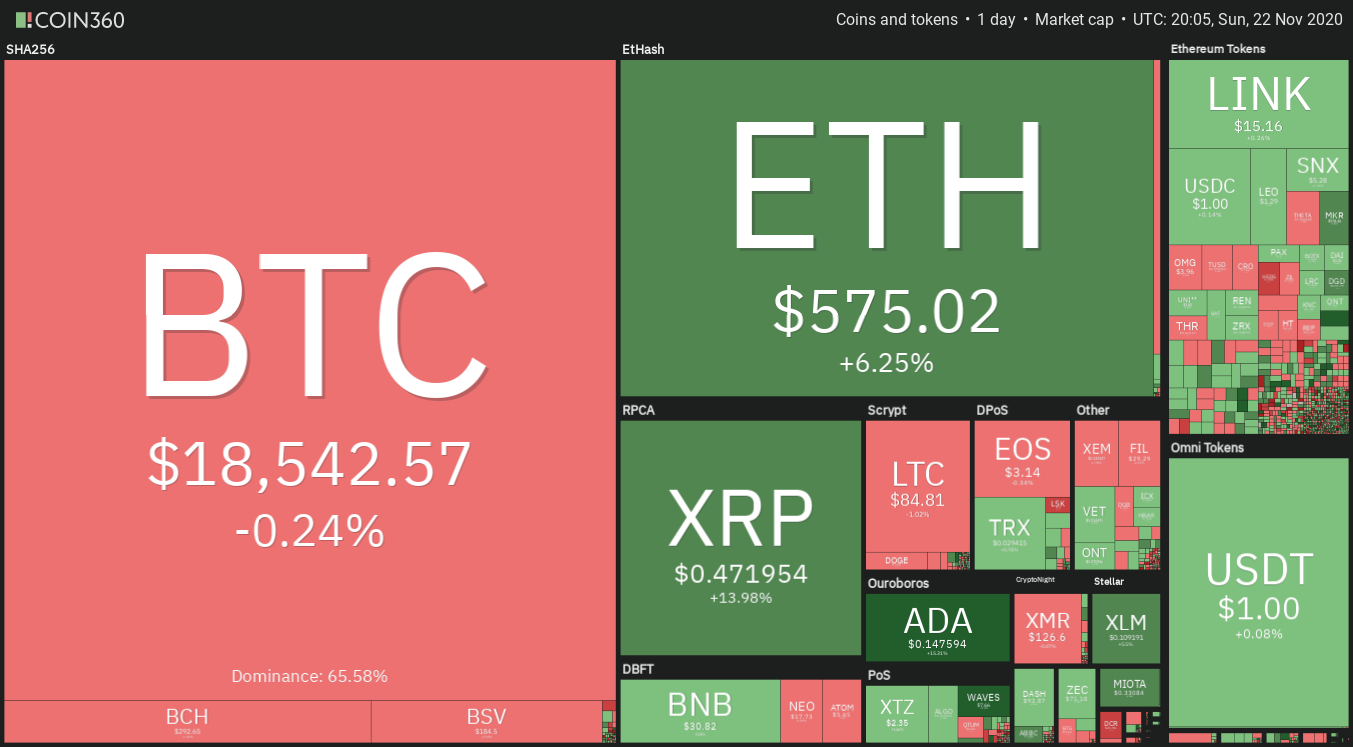 Bitcoin naysayers have long described the asset as too volatile but research by investment management firm Van Eck found that about 51% of the stocks on the S&P 500 are either equal or more volatile than Bitcoin on a 90-day basis.

Findings such as these could attract more investors to cryptocurrencies if the data became widely known.

Investors are now wondering if Bitcoin price hit a new all-time high next week and whether altcoins will follow?

Let’s study the charts of the top-five cryptocurrencies to determine the path of least resistance and spot the critical levels on the upside and the downside.

Bitcoin (BTC) formed a Doji candlestick pattern on Nov. 21 and that was resolved to the downside today. In a strong uptrend, the corrections usually last for one to three days, and then the trend resumes. 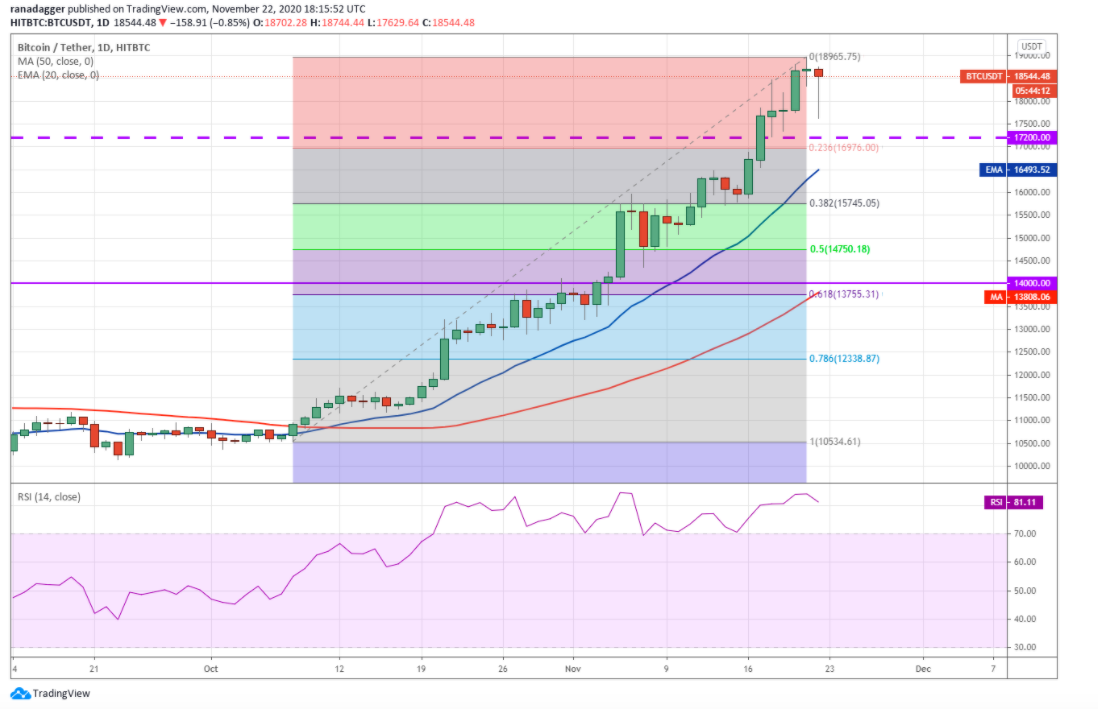 The strong rebound from the intraday lows today suggests that buyers are accumulating on each dip. If the bulls can now push the price above $18,695.75, a rally to the all-time high is possible.

If the buyers can drive the price above $20,000, the BTC/USD pair could pick up momentum and form a blow-off top.

One thing to note is that the BTC/USD pair has not corrected in a meaningful way since the current leg of the rally started from the $10,500 level.

The price has not even pulled back to the 20-day exponential moving average ($16,493) since Oct. 8, which suggests that there has been a buying stampede.

If the pair turns down from the current levels and drops below $17,629, the decline could extend to the 20-day EMA. The bulls are likely to buy closer to this support as the trend remains strong. 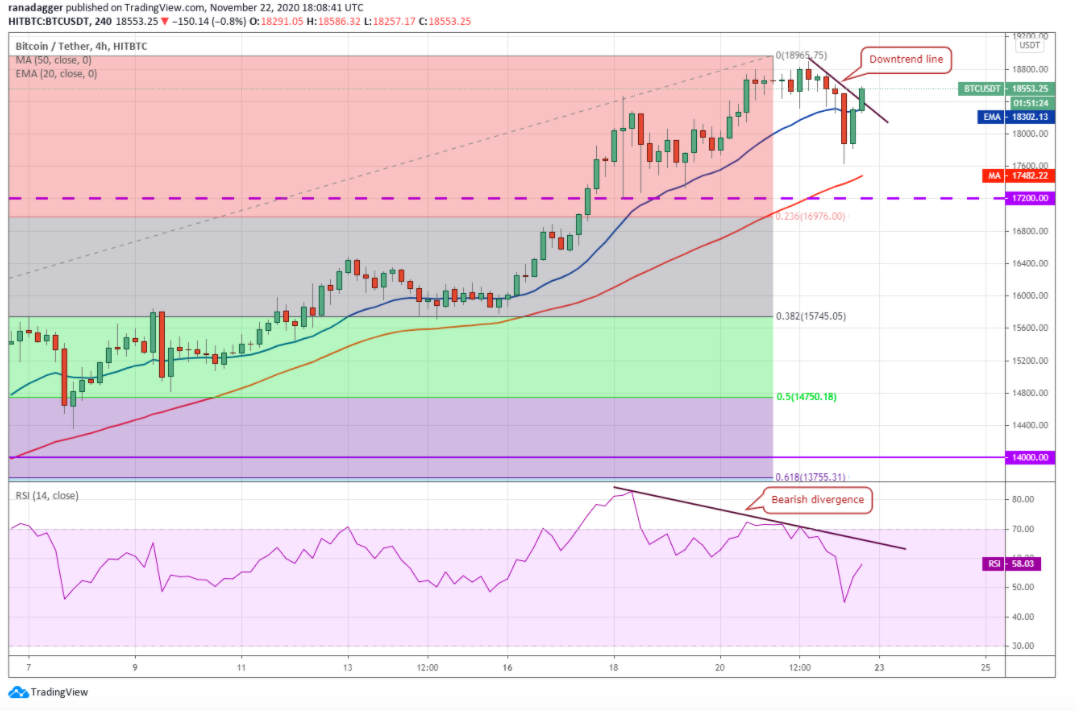 The relative strength index (RSI) on the 4-hour chart has formed a bearish divergence, which is a negative sign. However, the failure of the bears to keep the price below the 20-EMA suggests strong bullish accumulation at lower levels.

If the bulls can sustain the price above the downtrend line, a retest of the overhead resistance at $18,965.75 is possible.

On the other hand, if the price turns down from the current levels and breaks below $17,600, the possibility of a break below $17,200 increases.

Ether (ETH) picked up momentum on Nov. 20 after it soared above the overhead resistance at $488.134. The biggest altcoin quickly covered ground and rallied to an intraday high of $561.223 today. 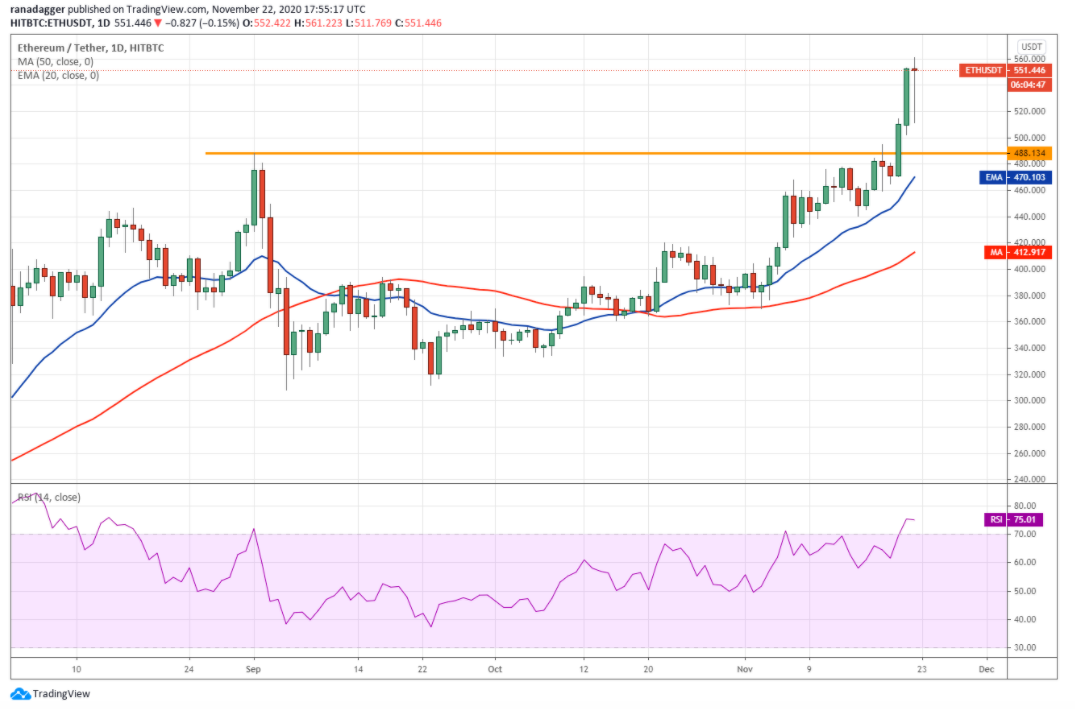 The correction in Bitcoin also resulted in profit booking in the ETH/USD pair today but the long tail on the candlestick shows aggressive buying at lower levels.

If the bulls can push the price above $561.223, the uptrend could resume with the next target objective at $625. The upsloping moving averages and the RSI in the overbought zone suggest that bulls are in control.

This bullish view will be negated if the bears can sink the price below today’s intraday low at $511.769. Such a move could attract aggressive selling and increase the possibility of a break below the critical support at $488.134. 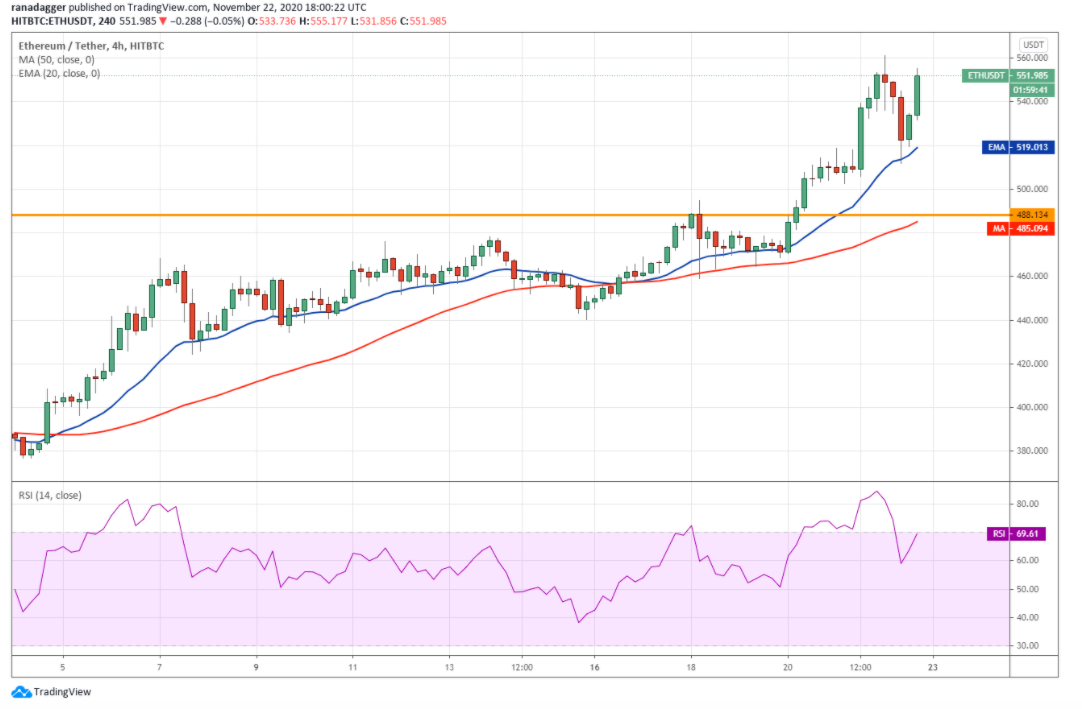 The 4-hour chart shows that the bulls aggressively purchased the dip to the 20-EMA. They will now try to drive the price above the overhead resistance. If they succeed, the uptrend could resume.

Conversely, if the price turns down from the current levels or the overhead resistance, the bears will try to sink the pair below the 20-EMA. If that happens, the decline could extend to the critical support at $488.134. 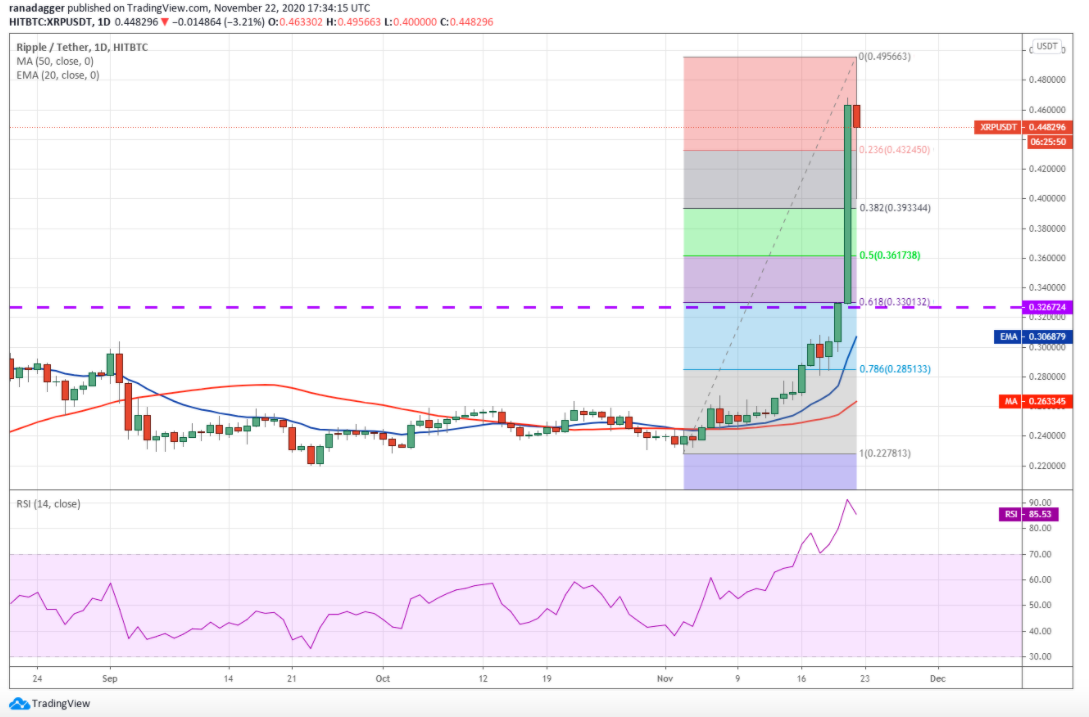 The psychological level of $0.50 attracted profit-booking by traders today and the price pulled back to just above the 38.2% Fibonacci retracement level at $0.393344. The long tail on the candlestick shows strong buying at lower levels.

The volatility expansion on Nov. 21 and today, has pushed the RSI deep into the overbought territory. Hence, the XRP/USD pair may enter a cool off period and consolidate for a few days before starting the next trending move. 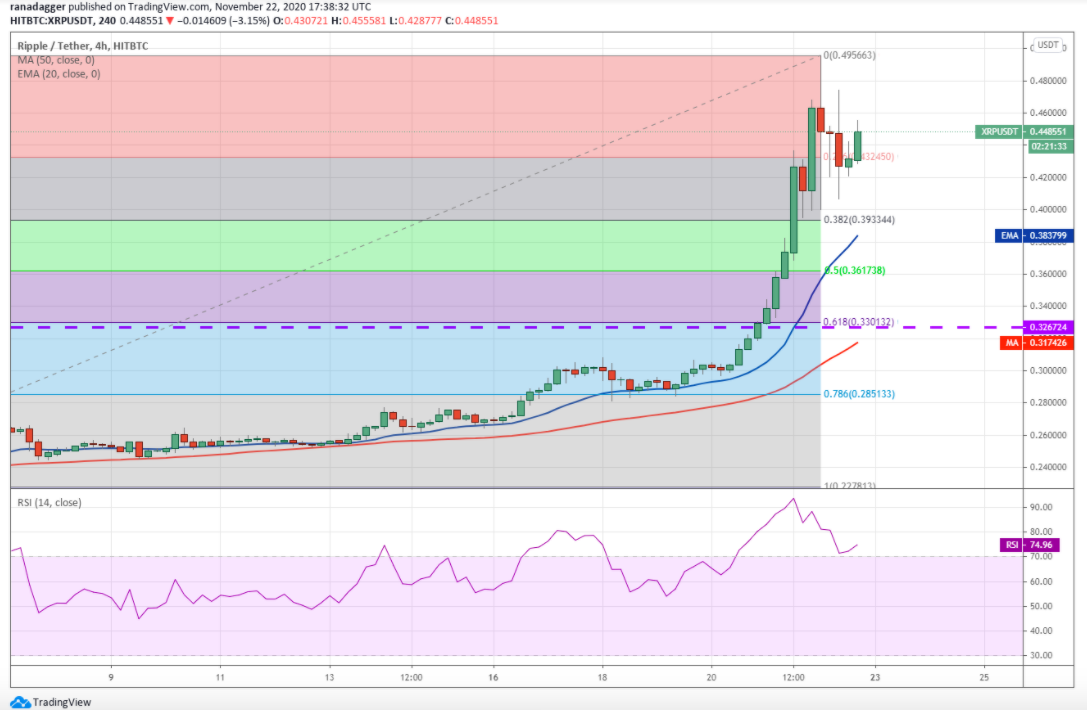 The 4-hour chart shows that the bulls are buying on dips closer to the $0.40 levels but they are struggling to sustain the price above $0.46. This suggests that traders are selling on minor rallies.

If the bulls can push the price above $0.46, a retest of $0.495663 is possible. A break above this resistance could resume the uptrend.

Conversely, if the price turns down from the current levels or $0.46, a deeper correction to the 20-EMA is possible.

Litecoin (LTC) is in a strong uptrend and the bulls had pushed the price above the overhead resistance of $84.3374 on Nov. 21. However, the buyers could not sustain the breakout, which suggests profit booking at higher levels. 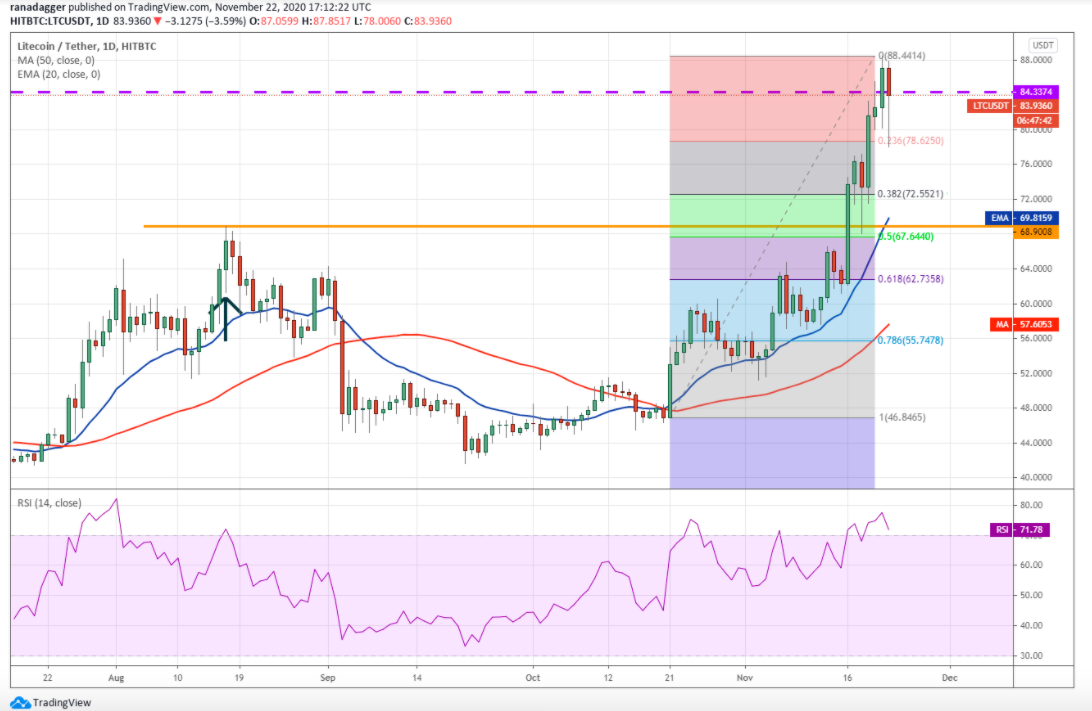 Today, the bears have pulled the price back below $84.3374 but the long tail on the candlestick shows buying at lower levels. If the bulls can push the price back above $84.3374 and sustain the breakout, the LTC/USD pair could resume the uptrend and rally to $100.

However, if the bears defend the $84.3374 resistance, the pair could drop to the 38.2% Fibonacci retracement level at $72.5521. This support is just above the 20-day EMA ($69), hence, the bulls are likely to defend this zone aggressively. The advantage will shift in favor of the bears if they can sink the price below $67. 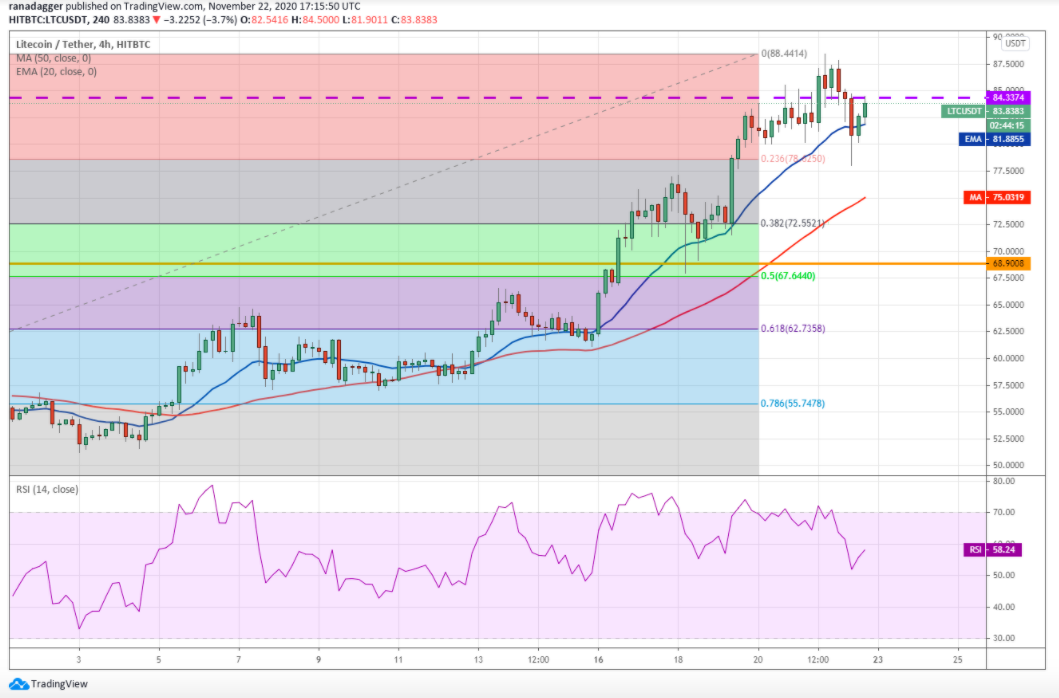 The 4-hour chart shows that selling intensified after the bears dragged the price below $84.3374, but the sellers could not capitalize on the break below the 20-EMA. The pair has bounced off the intraday lows and reached the overhead resistance.

If the bulls can sustain the price above $84.3374, the uptrend could resume. On the other hand, if the price turns down from the current levels and breaks below $78, the pair could correct to the 50-simple moving average at $75. 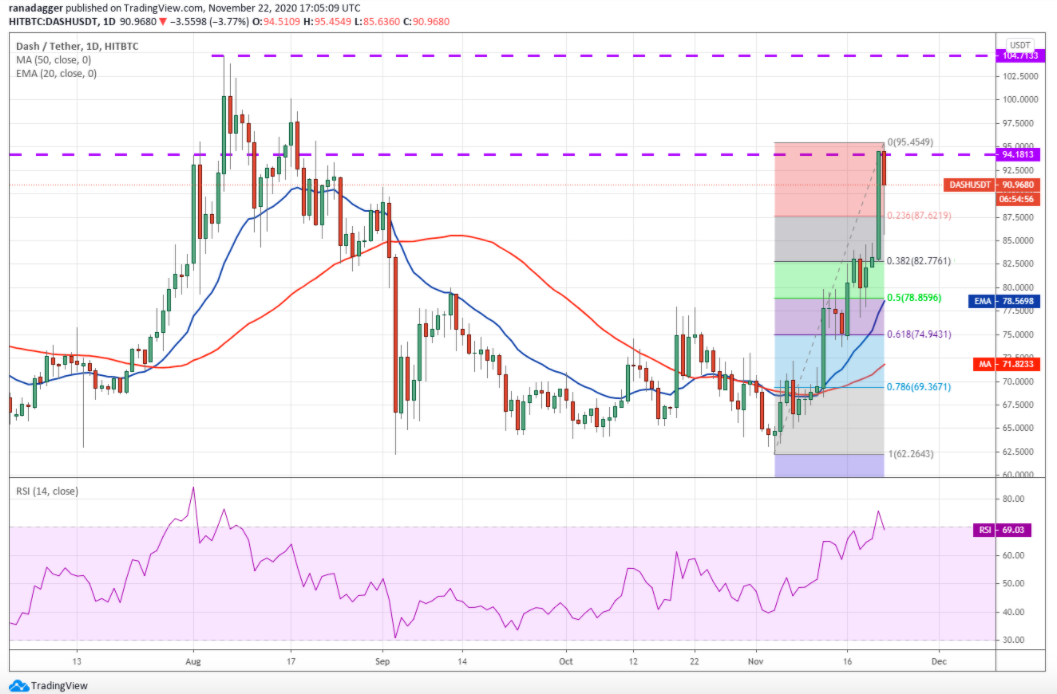 This suggests that failure to sustain the price above $94.1813 could have attracted profit-booking by short-term traders.

The first support on the downside is the 38.2% Fibonacci retracement level of $82.7761. If the price rebounds off this level, the bulls will again try to resume the uptrend by pushing the DASH/USD pair above $95.4549. The next target on the upside is $104 and then $110. 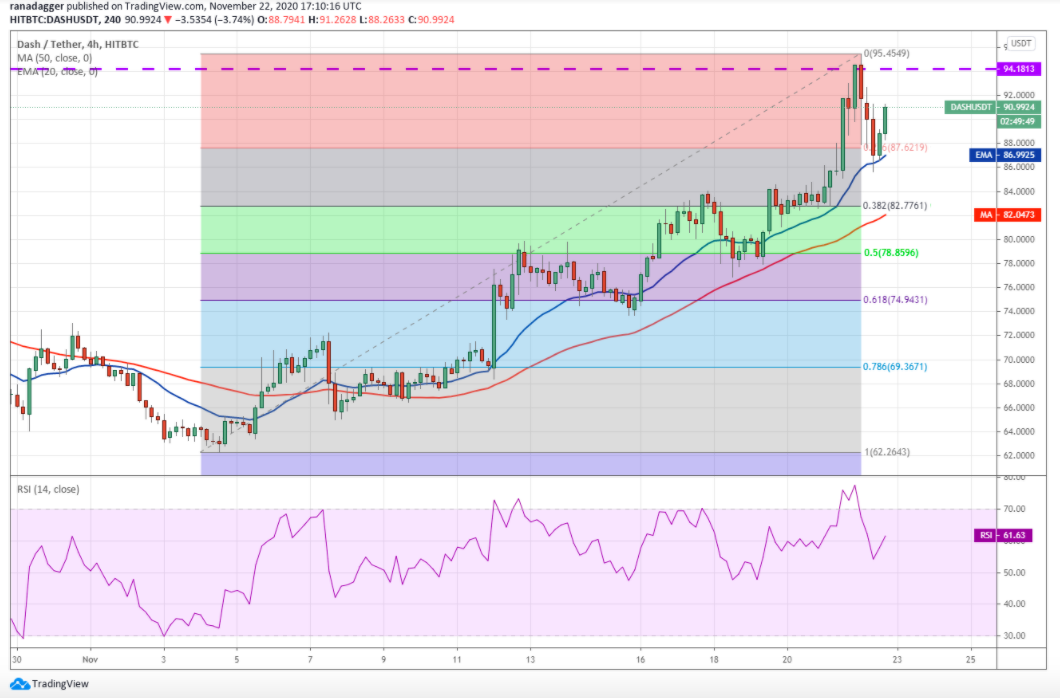 The pair has bounced off the 20-EMA on the 4-hour chart. If the rebound sustains above $91, the bulls will once again try to resume the uptrend by pushing the price above $95.4549.

On the other hand, if the pair turns down from the current levels and the bears sink the price below the 20-EMA, the bulls will try to arrest the decline at the 50-SMA.

The views and opinions expressed here are solely those of the author and do not necessarily reflect the views of Cointelegraph. Every investment and trading move involves risk, you should conduct your own research when making a decision.

Nigeria gets back 600-year-old artefact from the Netherlands