Biden’s incoming chief of staff, Ron Klain, in an interview on Sunday called on Trump and the little-known General Services Administration, an agency that can unlock key provisions of the law governing presidential transitions, to allow the transition to move ahead without delay.

“A record number of Americans rejected the Trump presidency, and since then Donald Trump’s been rejecting democracy,” Klain said in an interview with ABC.

He added, “I hope that the administrator of the GSA will do her job”, referring to agency head Emily Murphy, who is tasked with officially recognising Biden’s victory. 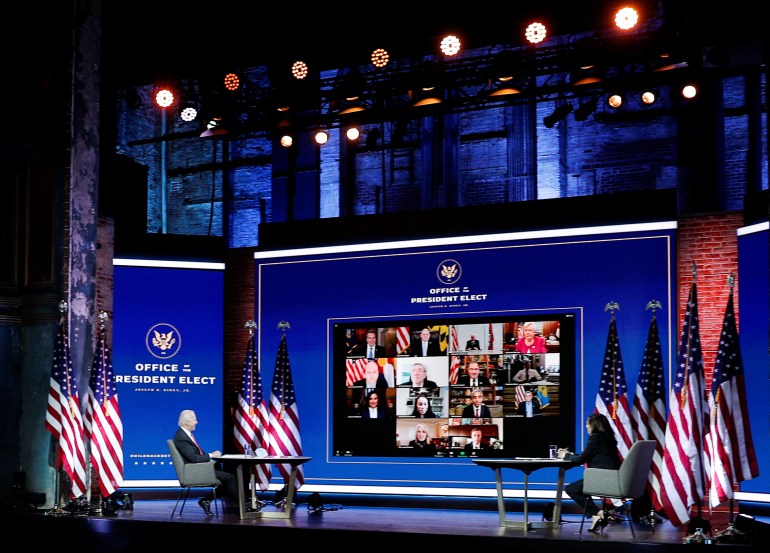 President-elect Joe Biden and Vice President-elect Kamala Harris hold an online video meeting with members of the National Governors Association (NGA) executive committee in Wilmington, Delaware as they move ahead with the presidential transition [Tom Brenner/Reuters]Klain also said that Biden will announce the first member of his cabinet on Tuesday. Biden said on Thursday he had selected his treasury secretary, who he said will appeal to “all elements of the Democratic Party … progressive to the moderate coalitions”.

Biden currently has 306 electoral votes, well above the threshold of 270 needed for victory under the US’s Electoral College system. It is also the same number of electoral votes Trump won in his 2016 victory over Democrat Hillary Clinton.

Klain said there will be “scaled-down versions of the existing traditions” for Biden’s inauguration. Inauguration ceremonies and related events typically draw huge crowds to Washington. COVID-19 cases and deaths are surging in many parts of the country amid a pandemic that has killed about 256,000 Americans.

“We know people want to celebrate. There is something here to celebrate,” Klain said. “We just want to try to find a way to do it as safely as possible.”

Trump has so far refused to concede the election. Instead, his team is focusing on several long-shot legal challenges, pressuring state officials to prevent them certifying results and, and where they are able, pursuing recounts.

Trump’s legal team has suffered repeated blows in recent days, with a federal judge on Saturday excoriating a bid to stop the certification of votes in Pennsylvania, where Biden leads by more than 80,000 votes. Legal attempts to prevent the certification of results have also failed in Georgia, Michigan and Arizona.

Earlier this week, the campaign requested a recount in two large Wisconsin districts, with officials in Milwaukee County accusing individuals observing the count on behalf of Trump on Saturday of attempting to block the recount by breaking rules and frivolously objecting to every ballot brought up for tabulation, according to the Associated Press news agency. Biden leads in the state by at least 20,000 votes.

On Saturday, Trump also petitioned for a recount in Georgia, just days after the state completed an audit and full hand recount of the about five million ballots cast. The audit showed Biden winning by 12,670 votes.

A new recount, which officials have stressed is extremely unlikely to change the results, would be done through electronic tabulators, and is expected to be much faster than the week-long hand recount.

Experts say Trump’s chances of overturning the election results are increasingly slim, if non-existent, given Biden’s current Electoral College lead. The president would need a series of unprecedented vote overturns in several states to come within striking distance.

With recounts and lawsuits coming up short, Trump has pressured Republican-led state legislatures to throw out the vote totals and declare him the winner.

Elected Republican officials in several key states have explicitly said they will not heed the president, which would break laws in some states, buck long-standing US norms, and likely lead to chaotic court and congressional challenges.

Despite his narrowing options, the president has remained defiant, tweeting on Sunday: “Fight hard Republicans”.

Even so, cracks have increasingly emerged in the party, whose elected officials had largely tacitly or explicitly supported Trump’s unfounded claims.

On Saturday, Senator Pat Toomey, a Republican from Pennsylvania, urged Trump to accept the outcome of the election.

On Sunday, Senator Kevin Cramer, a Republican from North Dakota, became the most recent conservative to criticise Trump’s transition delay, while continuing to defend the president’s myriad legal challenges.

Former officials and experts have warned a delayed transition could threaten the coronavirus pandemic response and national security going into 2021.

During the interview on Sunday, Biden’s chief of staff Klain called the statements from Republicans “encouraging signs”, adding “I hope they would start to accept the reality”.