Libyans have reacted with a mix of hope and doubts after the signing of a nationwide ceasefire deal intended to pave the way towards a political solution to the country’s conflict.

While observers have welcomed the United Nations-backed deal, few are under any illusions about the difficulties of turning it into lasting peace on the ground.

“We’ve seen a lot of deals in the past,” said Hassan Mahmud al-Obeydi, a 40-year-old secondary school teacher from the eastern city of Benghazi. “What’s important is the implementation.”

Friday’s deal was signed in Geneva by military delegates from the two main warring parties in the North African country, which plunged into violence in 2011 with the NATO-backed revolt that toppled former leader Muammar Gaddafi.

The Tripoli-based Government of National Accord (GNA) and rival forces led by renegade military commander Khalifa Haftar agreed to withdraw from the front lines, start demobilising armed groups and set about integrating them into the state.

Crucially, the deal also calls for the departure of all foreign forces from Libyan soil within three months.

“It’s good that the two sides have been prepared to compromise, but the devil is in the detail,” said Peter Millett, a former British ambassador to Libya. “There are an awful lot of questions. A key one is – will countries that have been sponsors of military forces in Libya support this compromise?”

Both camps in Libya’s complex war have received extensive backing from foreign powers.

Friday’s deal comes four months after Haftar’s Russian- and Emirati-backed forces gave up their yearlong attempt to seize the capital, Tripoli, a battle that killed hundreds of people and displaced tens of thousands.

In June, Haftar withdrew from western Libya in the face of a blistering counterattack by forces supporting the GNA which is backed by Turkey.

The battle had further deepened the bitter mistrust between the rival political camps and their military allies, as well as common Libyans. 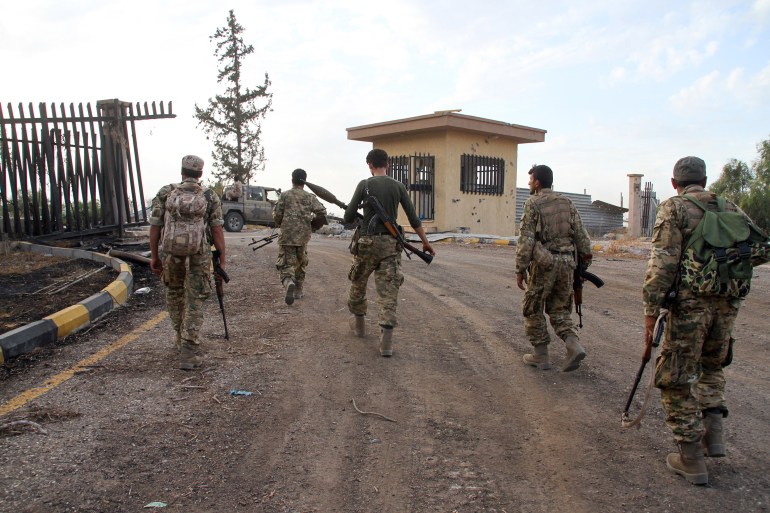 “We have experience with a previous agreement, which was five days before Haftar’s attack on Tripoli, during which he destroyed the capital’s infrastructure and killed many people,” pro-GNA fighter Salim Atouch said, voicing doubts the ceasefire would hold.

“I hope this won’t be like previous agreements, meaning we go back to war again. We will abide by it, but we are ready to react at any moment if it’s violated.”

The Geneva talks were the military part of a process led by the UN’s Libya mission UNSMIL.

Separate political talks that start on Monday aim to create a new governing body and prepare for elections.

Mohamed Dorda, co-founder and consulting director of geopolitical risk consultancy Libya Desk, said the ceasefire was a positive step that “creates a basis for the political talks”.

“Libya needs a security arrangement to allow a government to be set up. If we don’t deal with the security crisis, we will find ourselves in same situation in a few years.”

Massoud al-Fotmani, a 57-year-old from Benghazi who runs a group of food stores, said he hoped the ceasefire would hold.

“The war has caused a terrible economic downturn,” he said. “We’ve lost a lot of money because of the cutting of commercial ties between east and west due to the roads being closed.”

English teacher Mayssoon Khalifa, who works at a private school in Tripoli, echoed his call for lasting peace.

“Many are hopeful, but not optimistic,” she said. “I sincerely wish that this deal will hold. Libya deserves better.”