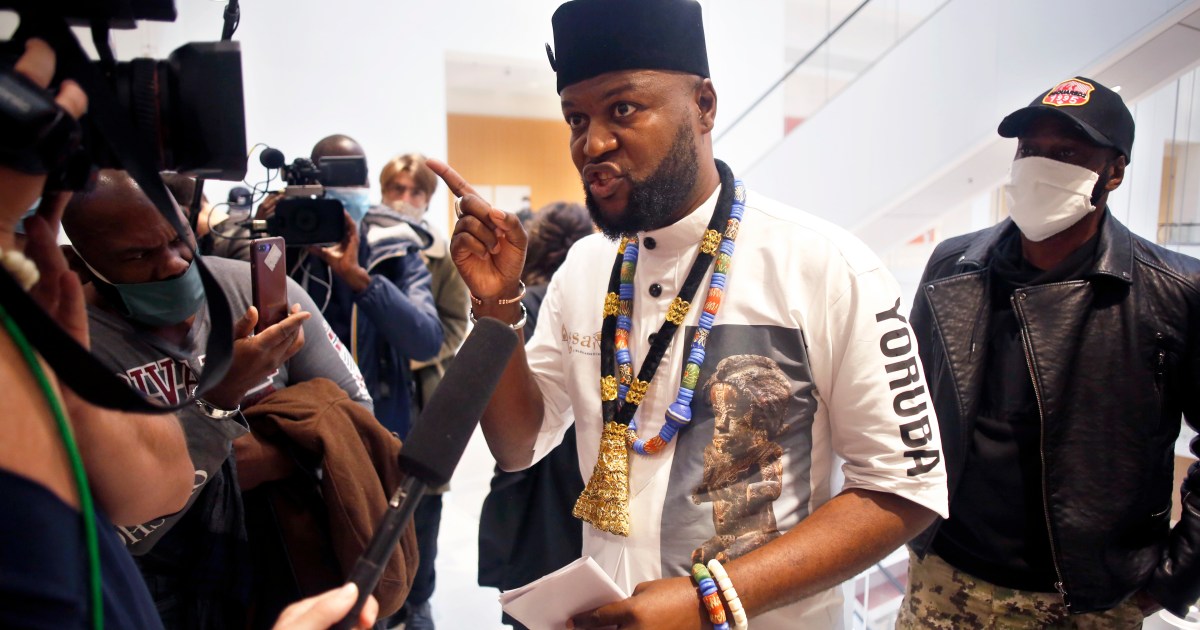 A Congolese activist and four others went on trial on Wednesday on theft charges for trying to remove a 19th-century African funeral pole from a Paris museum, as part of a protest campaign against colonial-era plundering.

Emery Mwazulu Diyabanza has staged similar actions in museums in the Netherlands and the southern French city of Marseille in recent months, inspired by global protests against racial injustice and colonial-era wrongs unleashed by George Floyd’s death in the United States in May by the knee-on-neck hold of a white policeman.

In the Paris case, Diyabanza and the other activists have been charged with attempted group theft of a historical object, and if convicted, they face up to 10 years in prison and a 150,000 euros ($175,460) fine, according to his lawyer.

Diyabanza, 41, led the operation at the Quai Branly Museum last June, denouncing “the pillage of Africa”.

“We’re taking it home,” he said in a video posted on social media after removing the funeral staff from Chad and parading it around the building.

Arriving defiant in the court, Diyabanza said it was about time that Africans, Latin Americans and other colonised communities take back what was taken from their lands under colonialism.

The charges stem from a June incident that Diyabanza streamed on Facebook, in which he dislodged the funeral pole from the Quai Branly Museum, saying it should be returned to Africa. The pole came from a region that crosses current-day Chad and Sudan.

Museum guards stopped them and police detained the activists. In the video, Diyabanza – born in then-Zaire, once ruled by Belgium – lists works held in the Quai Branly Museum in Paris that came from former colonies in Africa. He accuses European museums of making millions on artworks taken from now-impoverished countries like the Democratic Republic of the Congo.

The Quai Branly Museum, on the banks of the Seine River near the Eiffel Tower, was built under former French President Jacques Chirac to showcase non-European art, notably from ex-French colonies.

France’s then-culture minister denounced the incident, as did some historians concerned this kind of action could damage long-running negotiations with the French government to return African art.

A 2018 study commissioned by President Emmanuel Macron recommended that French museums give back works that were taken without consent if African countries request them. So far, France is preparing to give back 26 works of African art, out of some 90,000 works believed held in French museums.

We will not allow Khashoggi’s killers to evade justice