Iran has joined COVAX, a global initiative aimed at working with vaccine manufacturers to provide countries equitable access to safe and effective vaccines once they are licensed and approved [Abedin Taherkenareh/EPA-EFE]

Tehran, Iran – Iran is now in the grip of a third major wave of COVID-19 infections and most of its 32 provinces are classified as red on a colour-coded scale denoting the severity, with the capital experiencing the severest outbreak.

The official tally shows Iran recorded 195 new deaths on Sunday, bringing the total to 25,589 in the country battling the worst coronavirus pandemic in the Middle East.

Health ministry spokeswoman Sima Sadat Lari also announced during her daily COVID-19 briefing that 3,362 more daily infections were registered, upping the total to 446,448. Hospitals are caring for 1,377 patients at the moment, Lari said.

In the past week, Supreme Leader Ayatollah Ali Khamenei and President Hassan Rouhani have issued direct warnings for people to better adhere to public health guidelines.

“Do not underestimate corona,” Khamenei said in a live televised speech last week.

“The solution for this is in our own hands,” he said, calling on people to follow public health guidelines, including social distancing, using masks and washing hands regularly.

Khamenei’s remarks come shortly after the president also warned of rising cases because of people failing to follow guidelines.

“We need to assume this will last throughout the year, and even next year we might have to adhere to all these public health guidelines,” Rouhani said in a televised meeting of the national coronavirus task force last week.

“Even if we have access to a vaccine I believe we need to maintain this lifestyle,” he said.

According to officials, Iran has joined COVAX, a global initiative aimed at working with vaccine manufacturers to provide countries equitable access to safe and effective vaccines once they are licensed and approved.

Iran has also said it will buy 20 million doses of a vaccine made by an unnamed Indian company run by an Iran-born man.

Iran officially recognised its first coronavirus presence on February 19 by announcing two people were dead in the Shia holy city of Qom just south of Tehran. It implemented quarantine measures in parts of March and April.

The country underwent another large wave of infections in mid-summer, but the number of cases, hospitalisations and deaths had dropped in recent weeks. 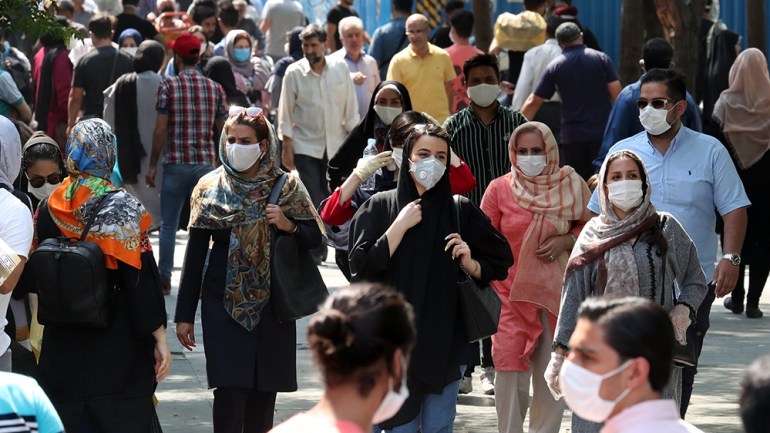 Now, as the country heads towards influenza and allergy season, top officials are considering a mandatory mask rule and potential penalties.

On Saturday, Rouhani said a current proposal under review is to stop offering public services to people who refuse to wear masks and impose penalties for publicly flouting the rules, without mentioning what the punishments might entail.

The president also said a list of activities and business categories have been devised and handed to provinces, and provincial leaders will have the authority to request one-week shutdown periods if required.

“We will have no religious marches this year, we will have no pilgrimages to Iraq,” Rouhani asserted as the end of Safar – or the second month of the Islamic calendar – approaches, when Muslims observe a number of mourning periods and millions embark on a pilgrimage to Karbala.

Iraq has officially announced it will not accept pilgrims this year because of the pandemic and Iranian authorities, including the supreme leader, have called on mourners to observe upcoming religious occasions at home.

As also reported in other countries, the coronavirus is constantly mutating, which changes infection patterns and demographics.

According to Deputy Health Minister Iraj Harirchi, who in February became one of the first Iranian officials to contract COVID-19, the virus is now more potent.

“In the first and second waves, people who contracted the virus would often get it in the society and not in families,” he said during a live televised interview last week.

“But now in many families where one person contracts the virus the entire family is infected.”

Hadi Yazdani, a 38-year-old physician based in Isfahan who visits COVID-19 patients on a daily basis, confirmed the changing trends and said he continues to see more clusters form within families and move to others.

“Unlike the start of the pandemic, we also receive a large number of younger patients and those without pre-existing conditions,” he told Al Jazeera.

Yazdani, who has his private practice but currently dedicates most of his time to private and charity clinics in the metropolis, said it appears a partial reopening of schools and large public gatherings to observe mourning ceremonies in Muharram, the first month of the Islamic calendar, had an effect on the number of infections. 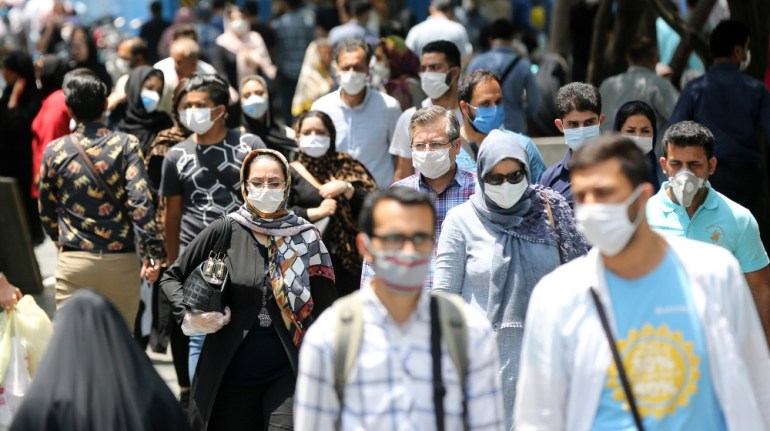 Iran is contemplating making wearing masks mandatory in public [Fatemeh Bahrami/Anadolu Agency]Officials maintain that Muharram gatherings were organised in strict adherence to public health protocols and say there is no evidence to prove that reopening schools in early September has had any effect on the number of cases.

“There are no official reports indicating that students have become infected with the coronavirus after schools reopened,” Minister of Education Mohsen Haji Mirzaei said on Saturday.

Families were also concerned in August when university entrance exams were held and close to 1.5 million students vied for places in universities.

So far, the authorities have tried to contain the virus using partial restrictions, including temporary closure of gyms, banquet halls and public pools, and temporary lifting of traffic control rules to discourage widespread use of public transport.

But as local officials and tireless public health workers sound the alarm across Iran, more may need to be done – especially during the flu season.

Yazdani, also a politician and a member of the reformist Union of Islamic Iran People Party, said a mix of inefficiency among managing officials, an inherently slow Iranian bureaucracy, and wide-reaching United States sanctions are contributing to the current situation.

“Imposing serious restrictions require a financial foothold, which has been destroyed by sanctions and mismanagement,” he said. “But either way, there might even be a need for case-by-case quarantines for cities and provinces.”

After unilaterally abandoning a landmark 2015 nuclear deal signed between Iran and world powers, the US imposed layers of harsh economic sanctions with the aim of crippling the Iranian economy. Among other things, the sanctions have impeded Iran’s access to medicine and its foreign reserves.

Just as the economy was relatively stabilising, the pandemic hit Iran, increasing the pressure on the cash-strapped economy in tandem with sanctions.

This has meant that Iran, which was already facing significant budget hurdles before the pandemic, has been unable to mobilise cash handouts to help those affected by the coronavirus. It has instead had to resort to relatively low-interest loans to affected people and businesses.

Iranian Foreign Minister Javad Zarif, in a recent interview, accused the US of “medical terrorism” for choking Iran’s financial resources during the pandemic.

In early April, the supreme leader approved a proposal to withdraw one billion euros ($1.16bn) from the National Development Fund of Iran, the country’s sovereign wealth fund, to manage the implications of COVID-19.

But Health Minister Saeed Namaki bemoaned last week “only a fraction” of the funds have so far been allocated to the ministry, and asked, “For what more important purpose have they put it aside?”

In late March, a number of Iranian authorities criticised the move by Doctors Without Borders (Medecins Sans Frontieres, or MSF) in Isfahan to build an inflatable 50-bed treatment unit, and rescinded approval for its intervention, a move that made the non-governmental organisation say it was “deeply surprised”.

Yazdani said, in a global pandemic there needs to be a global consensus on problem-solving.

“Just as we criticise Iran for not allowing MSF in the country and our city Isfahan, we criticise the US government for imposing sanctions that have prevented Iran from accessing its financial resources and helping its people,” he said.

“We need to have an assurance that if a vaccine is produced, it will reach all people around the world, including our people who are under sanctions, and no country, government or company could use this as a tool to wield its power.”

We will not allow Khashoggi’s killers to evade justice