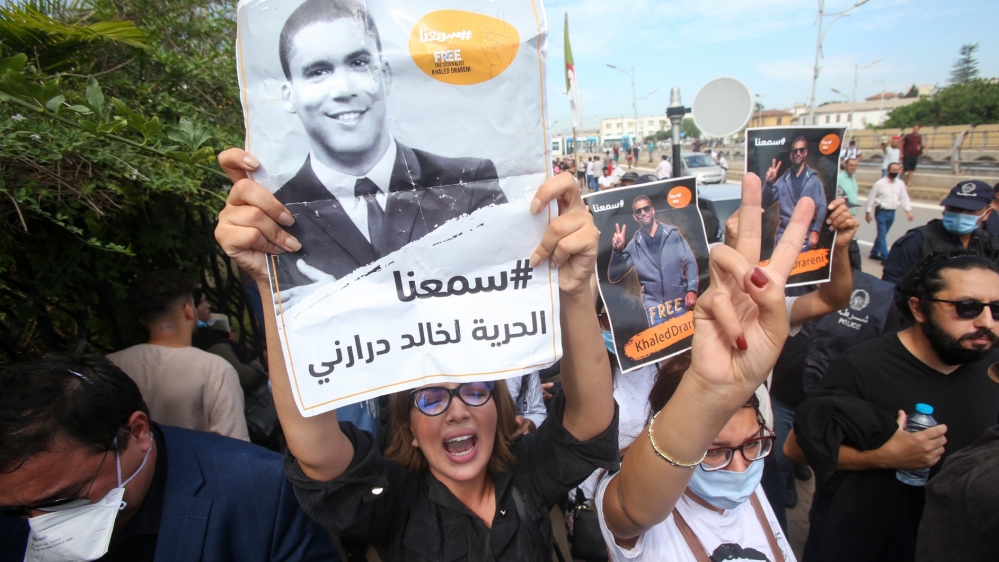 An Algerian court has sentenced journalist Khaled Drareni to two years in prison on appeal, reducing his original sentence, in a trial that rights group have denounced as violating press freedom.

He was convicted of “inciting an unarmed gathering” and “endangering national unity” linked to coverage of the protest movement. His sentence was not suspended, meaning he must stay in prison to serve it.

In an initial August 10 court decision, Drareni had been sentenced to a three-year term. Before that, he had been in pre-trial detention for more than five months.

One of Drareni’s lawyers, Abdelghani Badi, told reporters that Tuesday’s sentence is “excessive and reflects the authorities’ will to rein in the Algerian press”.

The severity of the sentence has angered journalists, some of whom had come to the court to support Drareni.

“We are outraged by the blind stubbornness of the Algerian judges who have just condemned [Drareni] to two years in prison,” RSF head Christophe Deloire tweeted.

“Khaled’s detention proves the regime locks itself into a logic of absurd, unfair and violent repression.”

THREAD We are outraged by the blind stubbornness of the Algerian judges who have just condemned @khaleddrareni to 2 years in prison (on appeal). Khaled’s detention proves the regime locks itself into a logic of absurd, unfair and violent repression. #WeAreKhaled #Khaleddrareni pic.twitter.com/iXu887sQnE

Drareni was tried along with Samir Benlarbi and Slimane Hamitouche, two prominent activists in the Hirak protest movement.

Benlarbi and Hamitouche faced the same charges but were sentenced to four months in prison and released on time served.

Drareni has denied all charges against him. “I am a journalist, not a criminal. I only did my job,” he said.

Drareni, who appeared to have lost significant weight during the trial, has been supported by a global solidarity campaign demanding his “immediate and unconditional” release because of a “worrisome” health condition.

The Hirak movement broke out in February last year and led to the resignation of Bouteflika, whose plans to run for a fifth term had sparked the protests.

Some journalists have been accused by the government of sowing discord, threatening the national interest and being in the pay of “foreign parties”, with several imprisoned and other trials continuing.

Amnesty International denounced the “outrageous” ruling against Drareni, saying it reflected “an alarming pattern of prosecutions targeting journalists and activists” calling for democracy.

Blockchain will stay a buzzword until everyone unites behind one chain

‘Great player’ Reguilon backed to succeed at Spurs by Monchi

Saudi economy shrunk by 7 percent in Q2 as unemployment soars