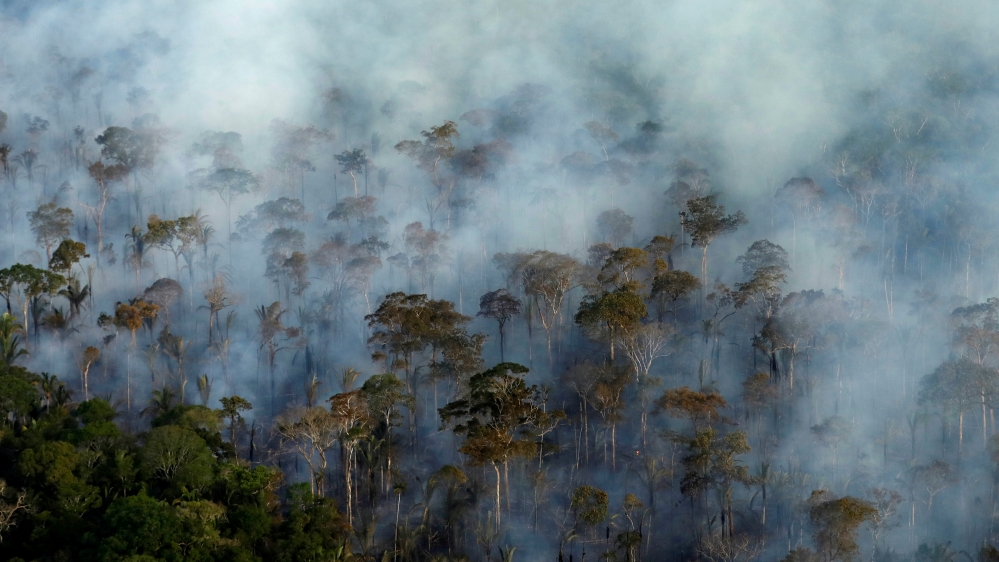 The number of fires in Brazil’s Amazon rainforest jumped 28 percent in July from a year ago, official data shows, as environmentalists warned a jump this week could signal a repeat of last year’s surging destruction of the world’s largest rainforest.

Brazil’s space research agency INPE recorded 6,803 fires in the Amazon last month, up from 5,318 in July 2019. Although that is a three-year high for July, the figure pales in comparison to last year’s peak of 30,900 fires in August – a 12-year high for that month.

Still, environmental groups say there are worrying signs of what may come, with the final days of the month showing a sharp spike.

More than 1,000 fires were registered on July 30, the highest number for a single day in July since 2005, according to an analysis by advocacy group Greenpeace Brasil.

“It’s a terrible sign,” said Ane Alencar, science director at Brazil’s Amazon Environmental Research Institute (IPAM). “We can expect that August will already be a difficult month and September will be worse yet.”

Sixty percent of the Amazon basin region is in Brazil. Since the blaze last year, it has faced global pressure to do more to protect the massive forest, seen as vital to containing the impact of climate change.

The fires are largely set to clear land illegally for farming, ranching and mining.

Activists accuse Brazilian President Jair Bolsonaro, a far-right climate change sceptic, of encouraging the deforestation with calls to open up the rainforest to agriculture and industry.

Under international pressure, Bolsonaro has deployed the army to fight the fires and declared a moratorium on burning. But activists say that does not go far enough to address the roots of the problem.

Greenpeace spokesman Romulo Batista said in a statement that “the government’s strategy of media-spectacle operations is not working on the ground”.

“On paper, the fire moratorium prohibits burning, but it only works if there is also a response on the ground, with more patrols. Criminals aren’t known for obeying the law.”

Instead, the Bolsonaro administration has slashed the budget, staff and programmes of Brazil’s environmental authority, IBAMA.

“Everything that was working was thrown out the window,” Erika Berenguer, an Amazon ecologist at Oxford and Lancaster Universities, told AFP news agency.

Fire season in the Amazon typically runs from around June to October. But fires are just part of the deforestation picture.

Throughout the rest of the year, ranchers, farmers, miners and land speculators are clearing forest and preparing to burn it.

The first six months of 2020 were the worst on record for deforestation in the Brazilian Amazon, with 3,069 square kilometres (1,185 square miles) cleared, according to INPE data – an area bigger than the nation of Luxembourg.

If a significant portion of those felled trees burns in 2020, the result could be catastrophic, experts warn. “I think August will be the make-or-break month,” said Berenguer.

Last month, scientists with US space agency NASA said higher surface temperatures in the tropical North Atlantic Ocean were drawing moisture away from the southern Amazon.

“As a result, the southern Amazon landscape becomes dry and flammable, making human-set fires used for agriculture and land clearing more prone to growing out of control and spreading,” NASA said on its website.

Fires are also worsening in the Pantanal, the world’s largest wetlands, adjacent to the southern Amazon.

In July, the number of blazes there more than tripled to 1,684 compared with the same month a year ago, according to INPE data, the most for that month since records began in 1998.

‘Lewandowski is the best player in the world’ – Bayern striker is Messi’s ‘successor’, says Matthaus

The twin struggles of Hong Kong and the Philippines

As we fight COVID-19, we should turn our gaze to space