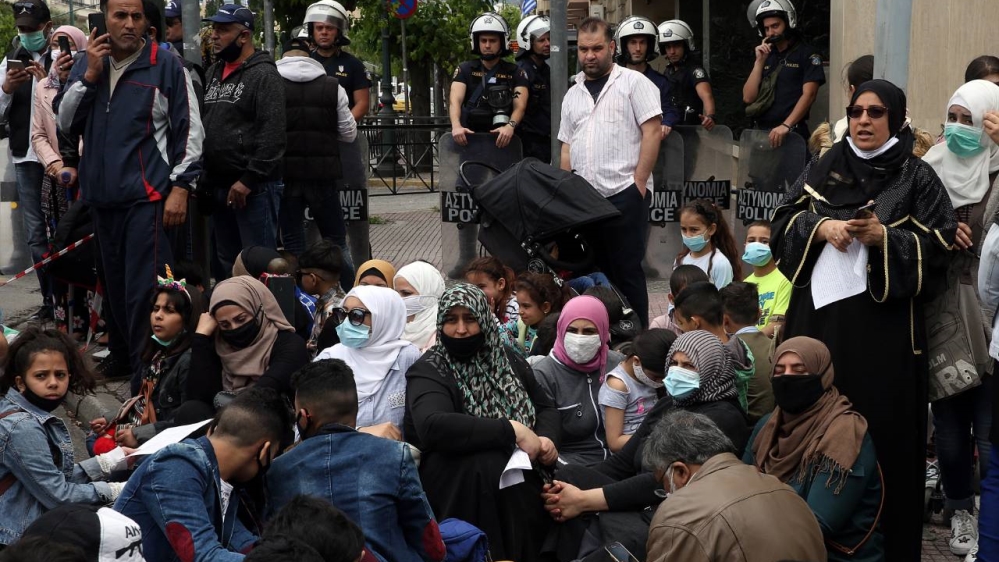 Syrian refugees in Athens protest the Greek government’s decision in May to evict them from homes rented by non-government organisations [File: Orestis Panagiotou/EPA]

Governments are set to pledge billions of dollars in aid for Syrians at a virtual conference on Tuesday to help refugees enduring Syria’s ninth year of armed conflict, as the coronavirus and high food prices worsen the plight of millions.

This year, the United Nations is looking for almost $10bn for people in Syria and surrounding countries. It hopes much of that will come from the 60 governments and non-governmental agencies gathering by video link on Tuesday from 08:00 GMT. The European Union is hosting the event.

The pledging, now an annual event, breaks down into a UN appeal of $3.8bn for aid inside Syria and $6.04bn for countries hosting refugees. Only a fraction has been raised so far.

In a report last week, the EU said in 2019 donors contributed $10bn in grants to Turkey, Egypt, Iraq, Jordan, Lebanon and Syria.

“The needs have never been greater,” said Corinne Fleischer at the World Food Programme, a UN agency.

In Syria, more than 11 million people need aid and protection, the UN says, while 6.6 million have fled to neighbouring countries in the world’s largest refugee crisis.

Many Syrians face unprecedented hunger, with more than 9.3 million people lacking adequate food, while the country’s coronavirus outbreak could accelerate, the UN has said.

The combination of an economic slump and coronavirus lockdown measures have pushed food prices more than 200 percent higher in less than a year, according to the World Food Programme.

“The COVID-19 crisis has had an immediate and devastating impact on livelihoods of millions of Syrian refugees and their hosts in the region,” UN High Commissioner for Refugees Filippo Grandi said in a statement.

However, money pledged is only what European officials call a sticking plaster to meet Syrians’ immediate needs.

Rebuilding destroyed cities is likely to take billions more dollars and cannot start until powers involved in the war back a peaceful transition away from the rule of Syrian President Bashar al-Assad, the EU says.

It will be the eighth annual Syria pledging conference, and the fourth hosted by the EU, which estimates that it has donated approximately $23bn to Syria and the region over the years.

Beyond its economic impact, the coronavirus has also forced the conference to be held online.

The event is usually an important opportunity for officials to meet on the sidelines to discuss thorny issues and resolve problems, but officials worry that the virtual format might reduce the conference to a number-crunching exercise.

US warns citizens of ‘arbitrary detention’ in China