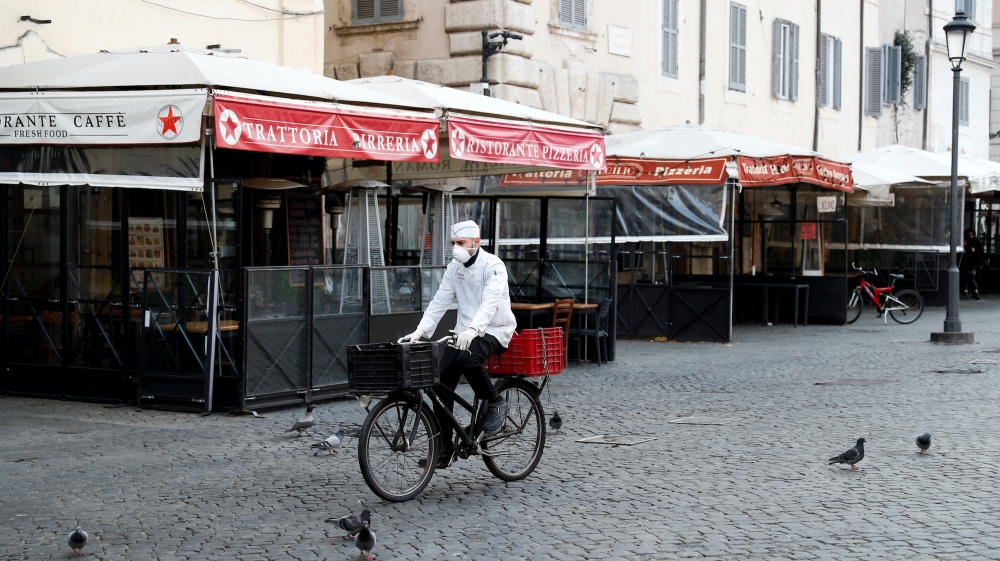 A delivery man wearing a protective mask is seen riding a bicycle at Campo de Fiori, as Italy goes into lockdown to beat the coronavirus, Rome, Italy March 10, 2020. [Remo Casilli/Reuters]

As I try to pass time in lockdown in Italy and come to terms with the new normal in my country, I often think about my grandmother and the 1943 degree certificate that was once on display in her living room. “Victor Emmanuel, King of Italy and Albania, Emperor of Ethiopia”, the certificate proclaimed in flowery characters, “grants the degree of doctor to … “. The document is a testament to human resilience. The fact that a young woman managed to complete a degree at the height of World War II, under a rain of bombs, in fascist Italy, reminds me that humans are capable of achieving great things under impossible circumstances.

I also think of that degree certificate today because it is from a time when it was not “business as usual” in Europe. It is from a time when a catastrophe came and changed everything. After the end of WWII, people living in most Western democracies did not face another threat grave enough to make them drastically alter the way they live. There have been widespread protests, political crises, and a few natural disasters, but in general, life went on as usual for many.

That is, until 2020. The COVID-19 pandemic that is taking the world by storm, with Europe as its new epicentre, interrupted daily life in the West in a way that was not seen in recent history. Of course, the level of devastation is nowhere near what our grandparents experienced during the world wars. Nevertheless, life is at a standstill in many countries. Shops, cafes, bars and restaurants are closed. Schools and universities are shut down. Airports are deserted. Business districts are empty. Almost overnight, people changed the way they live completely.

“Not since the end of the Second World War,” as the president of the European Parliament David Sassoli stated bluntly, “have we faced such a dramatic crisis.” Until today, us Europeans watched wars, droughts, coups, revolutions and epidemics from a distance, and participated in them only remotely through appeals, donations and demonstrations. Now, however, the crisis is at our doorstep and it is changing our lives. Could this be a chance for us to finally take action to address the critical global challenges of our time?

In recent years, it has repeatedly been argued that the Western world is not capable of changing its ways and responding efficiently to threats. As neoliberal dogma pushed for a shrinking role for public intervention, western democracies indeed appeared belittled by the free market and trampled over by a web of corporate interests and financial flows.

But the coronavirus pandemic, and the way Europe responded to it, raised hopes that change is possible.

The current Italian government is the embodiment of the problems facing Western democracies today – weak, chaotic, often inconclusive. And yet, in the face of an existential crisis, it succeeded in imposing a nation-wide quarantine, organising parts of the economy to tackle shortages and reinvesting in public services. Meanwhile, the Italian people, who are as invested in the current world order as any other Western nation, came together and changed their way of life to help eradicate the virus.

A deeply polarized country led by a weak coalition government is now discovering reservoirs of power and resilience that it probably never thought it had. And what is happening in Italy is no isolated case: Spain, for instance, has just passed legislation allowing it to take over all private healthcare providers in the country – another policy that flies right in the face of decades of free-market fundamentalism.

“We’ve seen that governments can act, and people can change their behaviour, in a very short amount of time,” said May Boeve, director of the climate movement 350.org. And, they can do so against an economic model that once appeared impossible to challenge.

As people responded to the threat posed by the pandemic, they demonstrated that it is possible to rapidly and drastically transform our system and societies.

What if we now carried this awareness beyond the present emergency? This is an urgent question because there is a great global economic depression looming on the horizon. Potentially, it can lead to more wars, increased authoritarianism and yet greater economic injustice. Or it can empower us to demand a much-needed transformation of a system in crisis.

The case for addressing the climate crisis with similar urgency is already being made. Indeed, in China, where pollution is thought to cause up to 1.6 million premature deaths a year, recent studies have argued that the reduction in pollution caused by the COVID-19 lockdown may have saved 50,000 lives. We changed the way we live, work and travel to counter this pandemic, why can we not do the same to counter the climate emergency? Why should we go back to a deadly status quo now that we know it is within our power to transform the way we live and organise our economy and society?

Take, for instance, our reliance on public services. After years of unrestrained neoliberalism, in the face of this pandemic, we realised that our security, wellbeing and prosperity depends more on strong and well-funded public services than multinational cooperations. While doctors, nurses and other workers from our national health services have been working day and night to save us, billionaire owners of multinationals have escaped to their bunkers. Redistribution of wealth, fair taxation and increased welfare is now a matter of national security.

Or take the question of work. As tens of millions of individuals are now switching to remote work from home, we might just realise how unnecessary and outdated our conception of labour used to be. In many cases, although of course not all, it is possible to work at least in part without spending hours commuting and polluting.

And as we stay home, with no childcare and no cleaners, we are rediscovering the absolute importance of care work – one of the most undervalued and ignored contributions to society. This is an occasion to understand that unpaid care work and underpaid cleaners and teachers are more valuable to our society than hedge funders and investment bankers, and to revise the economic reward each gets from society.

My grandparents’ generation not only graduated under bombs but also lived through the extraordinary transformation that followed the second world war. They witnessed a fascist regime give way to a thriving democracy; a dramatically unjust economic system being torn down and transformed into the post-war social compromise that built the welfare state. They witnessed the official rejection of institutional racism and the emergence of multiculturalism.

The current crisis is not as catastrophic as a world war. But its effects will be far-reaching, and the risk of an economic and geopolitical collapse is real. We can, however, emerge at the end of this tunnel with the first vestiges of a new world. The opportunity is there for us to seize, and we must start work on it now. At the very least, we now know we have the power to do so.

The views expressed in this article are the author’s own and do not necessarily reflect Al Jazeera’s editorial stance.

Clashes in Nagorno-Karabakh after Washington talks

Nine civilians killed in bomb attack on bus in Afghanistan